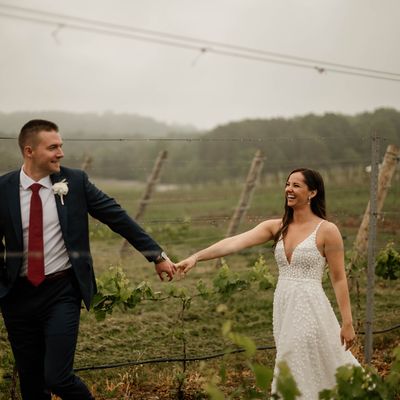 Brian and I met right around the end of middle school and the start of high school, can’t pin down an exact moment. However, I can recall an immediate attraction and simple friendship that grew stronger every time we were together. Our friendship quickly grew into a best friendship with a side of flirtation. Brian was a grade above me and we decided to give the dating thing a try… that lasted a whopping three months… teenagers… Thankfully, that didn’t alter our friendship and it continued for years to come. We went to separate colleges but would see each other every so often throughout the year and then a lot during the summer at our cottages on Torch Lake. This would always rekindle the spark we had between us but we didn’t want to risk losing the amazing friendship we had again by taking it to the next level. We dated other people, spent time apart and experienced life without each other at times. However, there was something about whenever we were together that we just couldn’t let go. Ultimately, after college, we ran into each other at a bar in Grand Rapids and decided this is it and the rest is history.

Since the day I met Brian, there was something special about him. I cherished our friendship and never wanted to see it end. After we ran into each other at a bar all those years ago and we started talking in more than a best friend tone and when he finally asked me to be his girlfriend (again), the first thing I said back was “Are you sure? You may never be single again.” and that was that. Just over a year and a half later, he proposed and just over a year and a half from then, we got married.

Three of my favorite attributes of Brian is that he is genuinely a good person and means well by all that he does. He is the most caring person I know and we just get one another. He also has a great sense of humor, can always make me laugh and light up the room around him no matter who’s present

Brian proposed to me on September 2, 2020. It was the Wednesday before Labor Day weekend and we were up north with our families. We decided to meet his brother’s wife, Erica, at a wine bar on her way up north. They timed it so we were leaving around sunset and then Erica had the great idea of watching the sunset down at the look out in Elk Rapids. We all made our way over there and Erica asked for a photo of her and Brad. In return, they took one of Brian and I. When Brian and I went back to redo our photo, he grabbed my hands and popped the question. The icing on the cake was that the lady who lived across the street saw it happen and came out with a bottle of champagne for us to pop! From there, we went to a nearby restaurant where our parents were waiting for us and the celebration continued from that moment through the end of the weekend with family and friends. It was perfect.

I fell in love with my dress on Instagram. I started following a bunch of bridal accounts to start getting ideas of the styles I liked. When Louie popped up, I couldn’t get enough of it. Louie kept popping up and my eyes and heart kept going back to it because it was so unique. I’ve never seen 3D lace like that. We had already booked our venue and it was at a vineyard. Louie’s design looked like vines to me and it would be a perfect match to the venue. However, I knew the designer was not from the states and it was unlikely that any local stores in the area would sell MWL dresses.
I made three dress appointments and started following those accounts on Instagram and a few weeks after following, one of the stores posted Louie! I was in disbelief. I called the store immediately and asked if they really had the dress in store, they confirmed. Then I stated that my appointment was in a month and ensured it would still be available at that time, they confirmed. AMAZING.
The dress was at the third and final shop of the day. I knew I couldn’t commit to anything until I at least tried it on. All my girls knew about this dress at this point and they were excited and nervous all at the same time. Nervous I had the expectations that I’d love it but it could not be the case. After all, I’ve only seen it in photos.
However, it WAS the dress and we all instantly knew the minute I put it on. It’s unlike anything else and I absolutely love/d it.

Is anyone able to pick one single moment as their “best moment” at their wedding? I would have to say the day as a whole was my favorite. Just knowing that everyone there was there for Brian and I and to celebrate our love and marriage. It was such an overwhelming feeling of bliss that no one can prepare you for. All of our people in one place was truly spectacular and brought us such joy from the morning until the very end of the night.

My favorite details of the day were the following:

My bouquet had a piece of eucalyptus from the arrangement on my grandmother’s cachet the day of her funeral as a tribute to her memory and having her there with me.

Brian’s dad passed away several years ago and he loved the artist, David Gray. We had one of our good friends and groomsmen, Adam, record a David Gray song on the piano for the song I walked down the aisle to. We didn’t tell anyone about this and it was a complete surprise to our guests.

Brian’s dad owned a winery before he passed named Three Fires Wine and when he passed, there was a wine named after him – Left Bank Homage à Don B. Gill, Jr. We incorporated this wine into our wine unity ceremony. Brian wrote the unity ceremony portion of the full ceremony and we had my parents and his mom up at a wine barrel we had set up at the front of the ceremony. There, Brian’s youngest brother, John, poured each of us a glass of wine along with a glass for Don. The parents recited their well wishes and we cheers altogether uniting our families together.

Everyone gets so worked up about the little details of the day but it’s important to remember that none of your guests know what you planned for your wedding so if something doesn’t go as planned, no one knows but you so don’t work yourself over it because something will go unplanned. For us, it was the weather.

Secondly, take photos with your guests! This is one thing I did not intentionally do and I regret it. The day goes by so fast and it’s so fun but when you look back at photos and videos, you don’t always get to see the individuals that made your day so special. 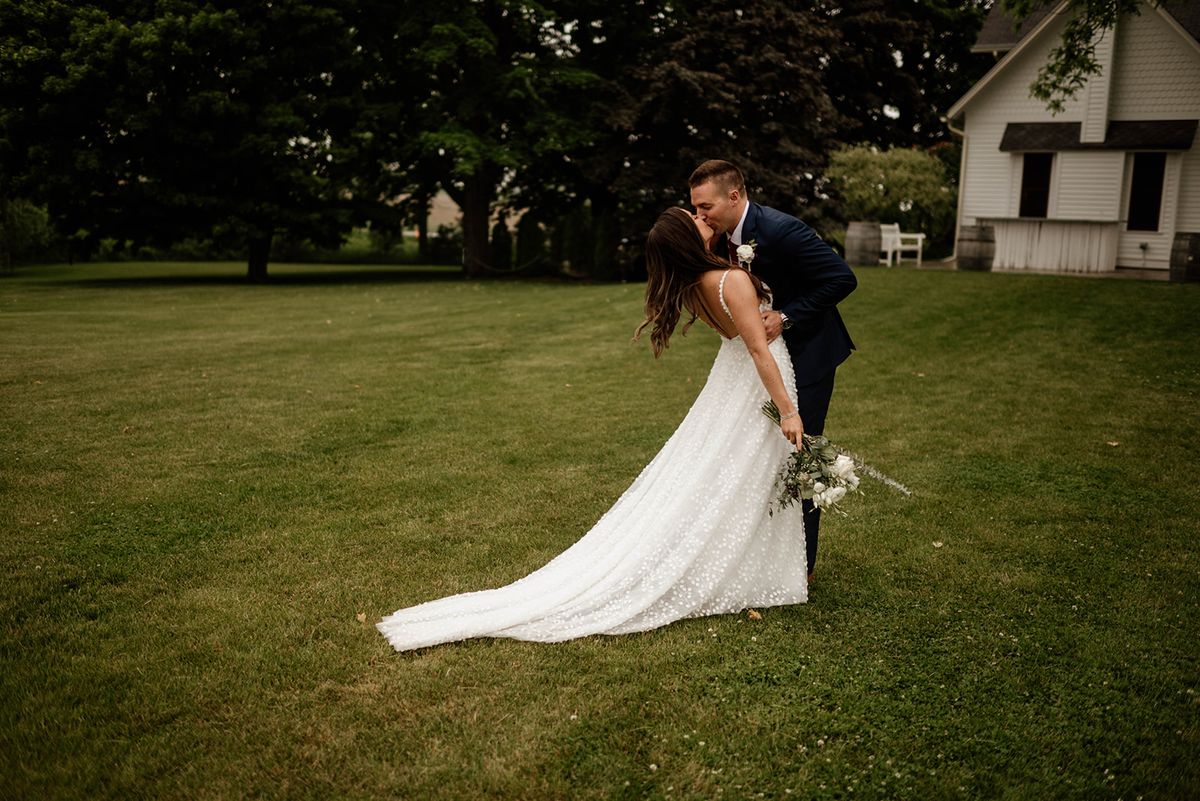 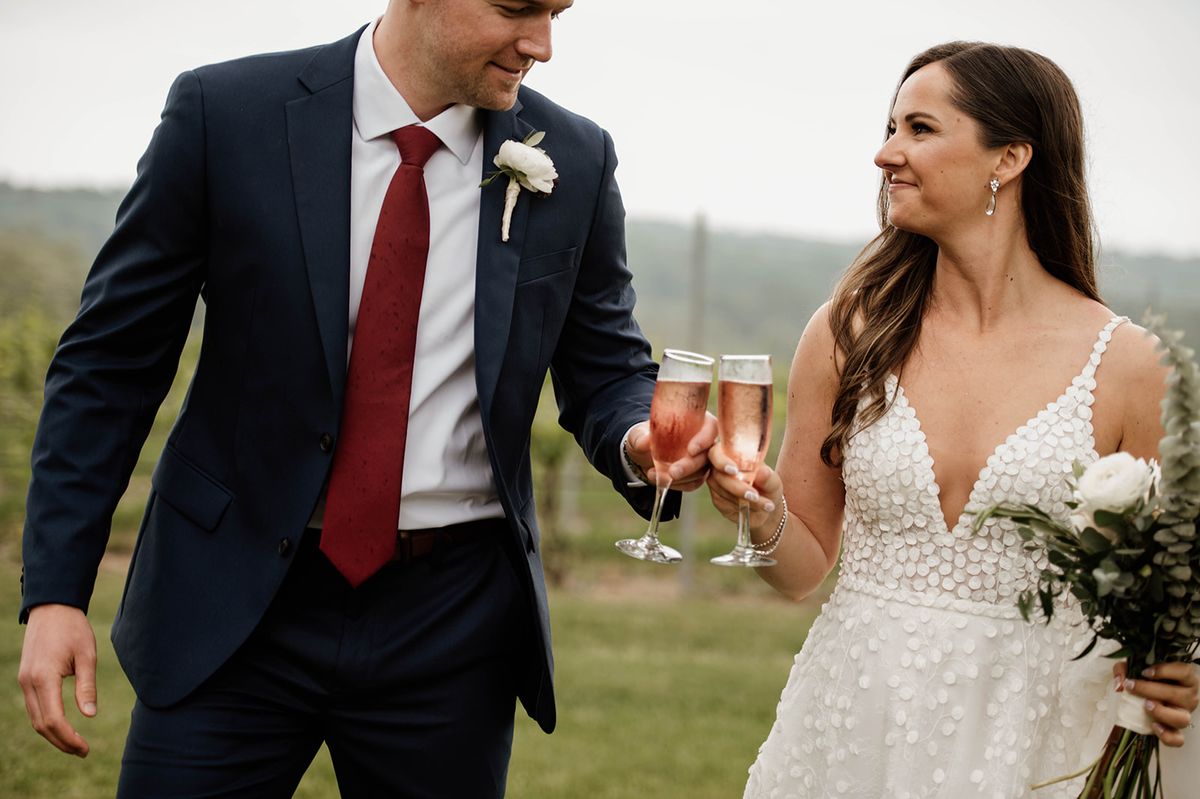 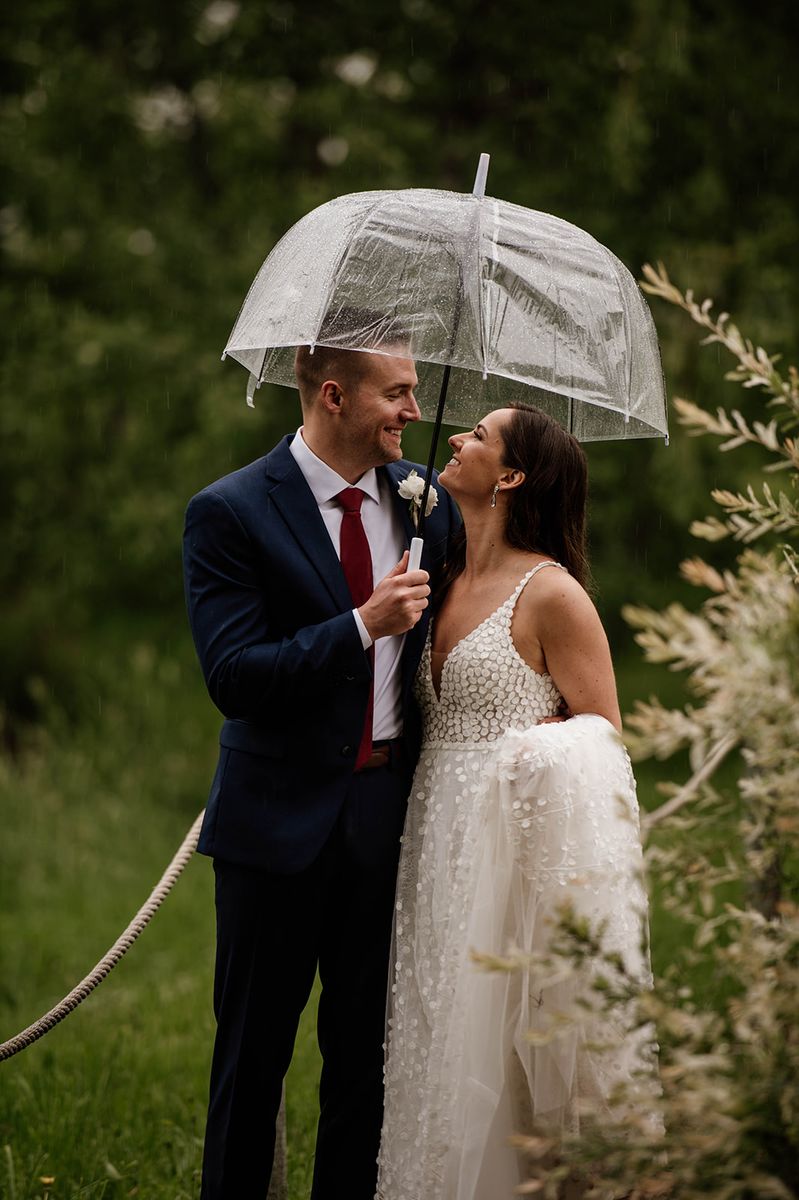 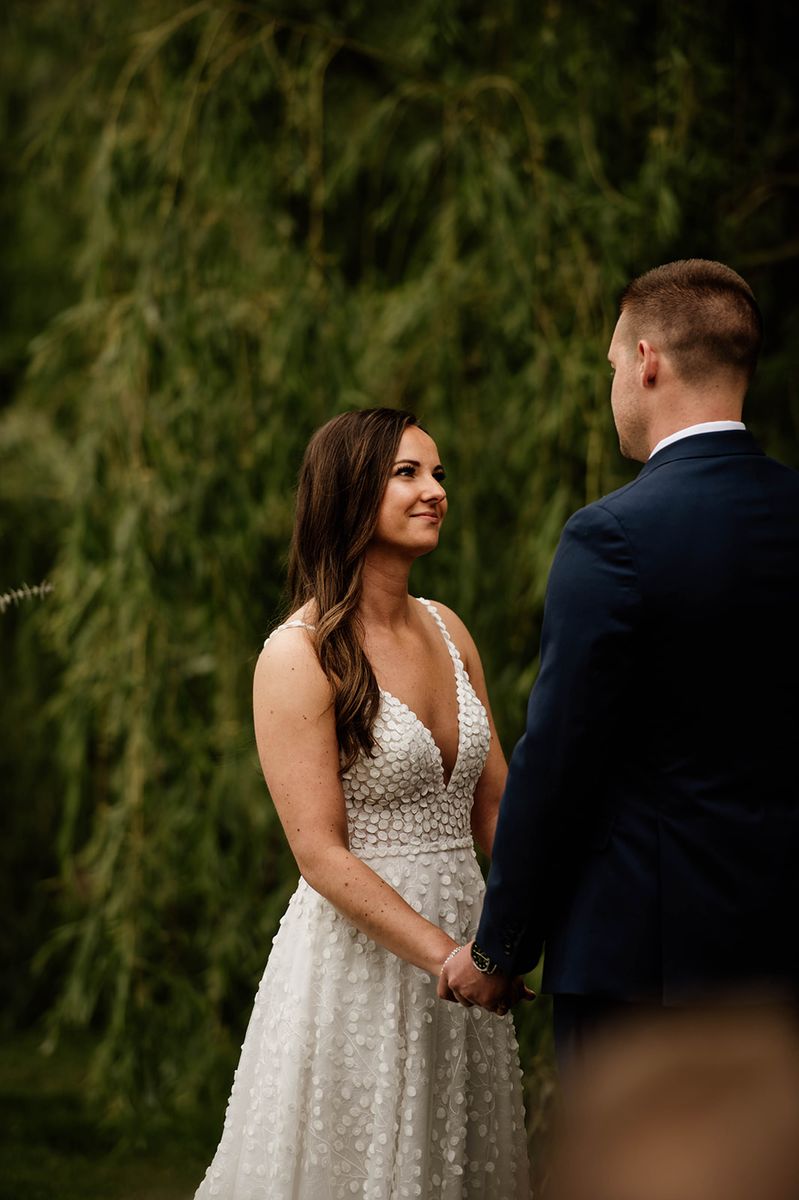 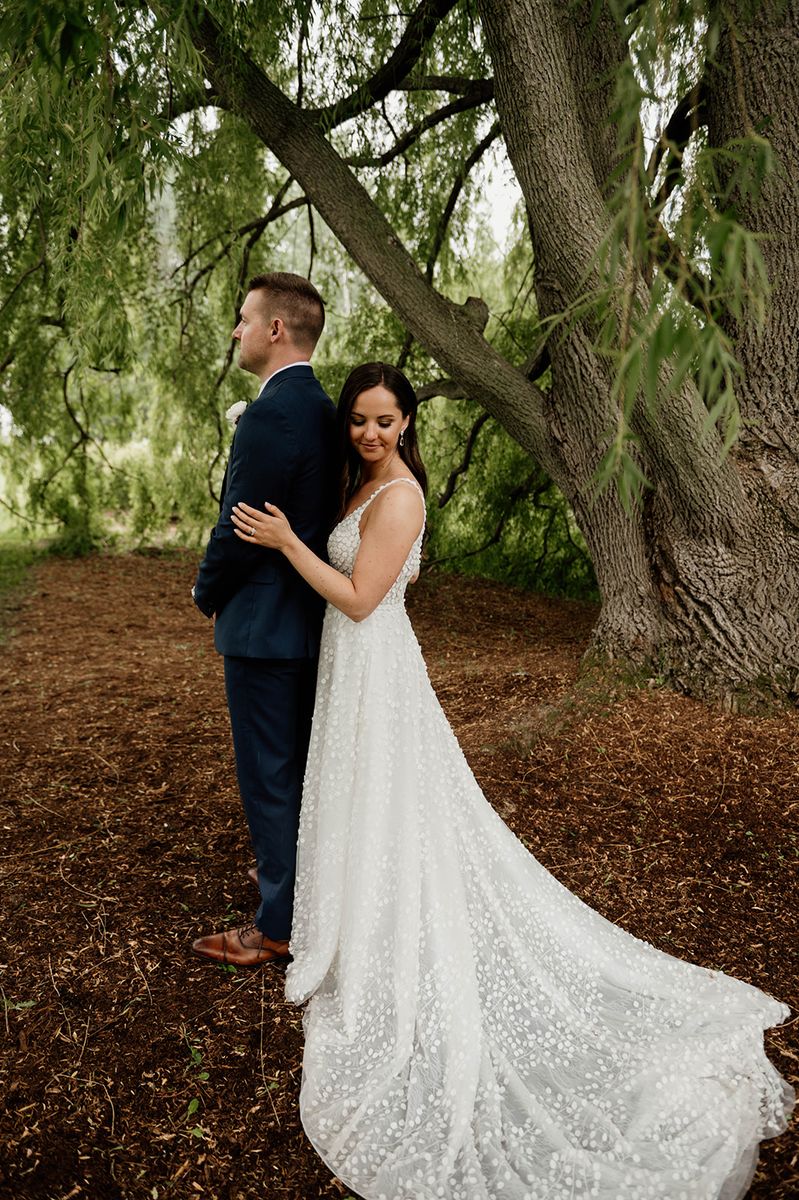