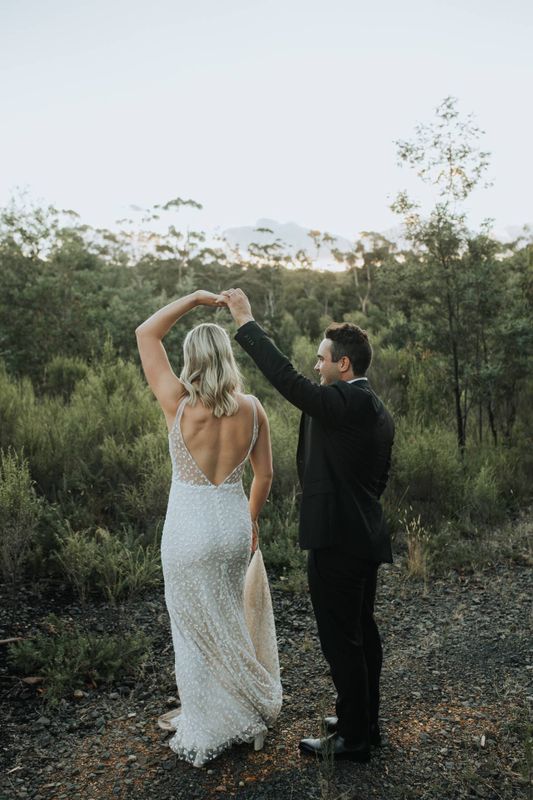 Elle and Farran knew that they were onto a good thing very early on.

There was instant chemistry, they got along so well and made each other laugh all the time, and were so supportive of one another in chasing their dreams for the future.

Elle thought Farran was such a kind, humble and modest person however she wasn’t overly impressed about how annoyingly good he was at everything he did.

Farran knew very early on that he wanted to be with Elle for the rest of his life, such a kind, caring, and empathetic yet crazy and spontaneous woman.

The same went for Elle, she knew Farran was a keeper as he was being so supportive of her moving to Melbourne to study, and even though they were going to be doing long distance, which can make or break a relationship, he was still pushing her to go.

Long-distance was always going to test your relationship at times however it has only strengthened the bond you have.

It requires lots of communication, compromise, and planning, three skills that you both now excel in and will be sure to help you with a successful marriage.

Eventually, an awesome opportunity arose for Farran to move to Melbourne for a fantastic job and the two of you grab that chance and ran with it, moving in together, along with your awesome roommate Paddy before moving into an apartment just the two of you, and not killing one another, it was clearly meant to be.

So being the spontaneous type that you both are, Elle maybe a little more than Farran, however, he’s always right behind ready to jump in on your crazy decisions, decided to take the plunge and buy a block of land in Moama and prepare to build your first house together- eventually, after three short years it was finished.

Farran and Elle headed to Ocean Grove one weekend to visit some friends and decided to head to the beach for a walk.

Now, this is not Farran’s favorite activity- admitting he gets bored and sick of beach walks very quickly however Elle absolutely loves just strolling along the beach stalking all of the cute puppy dogs.

On this particular day, Farran was too nervous to really care.

He had decided that he wanted to propose along the beach but when they arrived it was absolutely packed- literally every man and his dog was there, so Farran decided to just let Elle walk and walk and walk with the hope that it would get a little quieter as they went along.

It did not- he now had to decide if he would abort the mission or still propose.

Elle was in her absolute element, she couldn’t believe how much time Farran was letting her spend strolling along the beach that day- thinking to herself- geez he is being so kind, he must be in a good mood- little did she know he was trying to think of a Plan B.

This particular day happened to be freezing cold so Elle wasn’t all that interested in walking along the waters edge like she usually did, but Farran almost pushed her into the water to walk so that he could sneakily get the ring out of his coin pocket without dropping it in the sand.

Suggesting they walk the loop through the sand dunes back towards the car park- weird thought Elle because he hates long walks, once they were finally in a secluded spot in the sand dunes an extremely nervous Farran got down on one knee and asked Elle to marry him.

Elle laughed initially because she thought he was joking- he had fake proposed once already at the top of the empire state building- however, quickly realizing that he was very serious, proposing with her dream ring!

It was obviously a big YES with lots of happy tears!

Elle and Farran, you have already achieved so much in your life together and made so many amazing memories together, and like you both said, every day there is a new favorite memory.

You have been on some awesome travel all over the world and the fact that you have been lucky enough to also spend those experienced with some of your closest friends and family. I think a big highlight would have been Budapest, private baths, Farran, and a little too much champagne- you’re probably lucky you didn’t drown in the baths pal.

Picking up little Arthur was definitely a highlight of 2020 for you both, your first fur baby to love, however, he may just end up being a daddy’s boy because Farran looked at Elle after holding Arthur for 5 seconds and stated – I don’t think I’ve ever loved anything as much as I love him.

Who knows what married life has in store for you both, whether that is starting your own family, your careers, more travel, or making more memories with your family and friends, you will be doing it with the person you love the most, the person you have the most fun with and the person that makes you laugh the most.

Elle, today Farran feels so blessed to be marrying such an intelligent, beautiful and caring woman who is always going to have his and your family and friends’ best interests at heart.

Farran, you are the funniest person Elle knows, you keep her grounded and bring out the dorkiest yet best version of her and she loves how loyal you are to your family and friends.

Elle and Farran, although it’s taken a little while to get here, with a few ups and downs, you are so excited to be here to celebrate your love and get married in front of the most important people in your lives.

How did you know they were the one?

Immediately haha. The person I need for everything. My absolute best friend + traveling buddy.
Fell hard. I was in year 12, about to move to Melbourne to study Chiropractic. Farran had just moved to Echuca to play football after quitting the VFL but we made long-distance work for 3 years before he moved back to Melbourne for 2 years whilst I finished my 5-year degree. Then we moved back to Echuca and here we are!

Farran is so generous. So kind, loving, nurturing, humble, annoyingly good at every sport he does, in particular football, but he will never gloat about himself. He will always be by your side and loves hard. Everyone needs a Farran.

Farran proposed on the beach in Ocean Grove – one of our fave spots to slow down (stalking the dog beach haha). I had absolutely no idea he was going to be proposing. He designed my ring and got it made with the help of my sister in Melbourne (this in itself was special, I was involved in the same process with my sister’s ring with her husband, with the same jeweler).

We went for breakfast with some friends in Barwon heads who we had not seen in a while and they were joking about how we still were not married (Which didn’t bother us), now I look back and think how nervous Farran must have been copping the heat with a ring in his pocket about to propose one hour later haha.

We went down OG beach and literally every man and their dog were down there. Farran kept encouraging me to feel the water to get rid of me so he could get the ring out of his wallet (not in a safe place), and I would normally love to be in the water but it was freezing. Little did I know how difficult I was being. We decided to walk up off the beach (to escape people) and that’s when Faz proposed!! My mum even thought when I face-timed her that I was playing a joke on her and wearing my sister’s ring.

Walking down the aisle with my mum & dad by my side, towards the man of my dreams. Both grinning from ear to ear.
Our vows we wrote separately.
Our first dance to Lover my T- Swift.
Celebrating our love with 50 of our favorite people in a micro wedding instead of our original 120 guest list (thanks to covid cancellations guiding us to our dream day with no obligations).

It was January 2020, and our wedding was in October (pre covid lol). I didn’t realize the process of getting a dress made and my sister reminded me I really needed to choose a dress.
A friend was getting married before me and I knew she got a dress from MWL so that was really the only boutique I knew of except Fairy tale bridal + Grace loves lace which I didn’t have any desire to try. I knew I did not want the typical wedding gown or process. So the lovely Emily in Melbourne squeezed me in and I chose 5 dresses that I thought would best be my style before attending, not entirely in love with one in particular but sure I would adore one when I put the gown on. I didn’t want heavy, thick, too much lace, or a standard dress.

A few days prior to the appointment, Rosey was released. As soon as I saw it on Instagram, I knew that was my dress. I adored her. The most beautiful dress. Myself, with my mum, sister, and her baby met Emily at 9 am on a Saturday morning and within 10 minutes I had chosen my dress.

Thank you for creating such a special dress, so unique. I also must mention how fantastic Emily was at the boutique. It was such a pleasant experience and the culture MWL has created is stunning.

Fave details would have to be the way our flowers came together to compliment my Rosey and tied in with the boys black + white, and our girls in white.
Calm, elegant, and pretty.
Low key micro wedding vibe.

Find a dress you love and adore everything about it.
The day will be mega stressful, things will go wrong, things will be behind, but enjoy every second. Look around and remember all the details. Bottom line is, enjoy your love! It is such a collection of your time spent together.
The ceremony is everything and more.

MWL
Whites & Woods – photography. A dream!
Handzaround videography. I cry every time I watch our video.
Kellie Anne music – insane talent. Managed a micro wedding incredibly.
The food! Soft cafe Geelong.
The venue – everything and more we could ask for (The burrows – Daylesford). 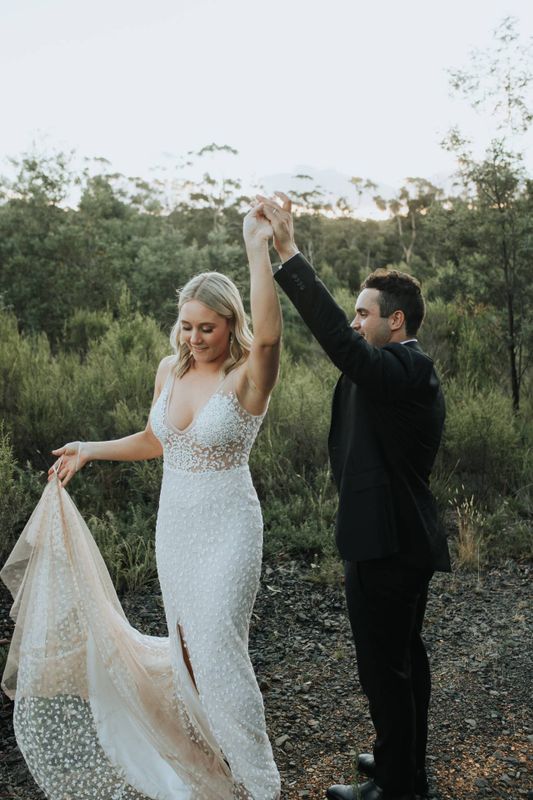 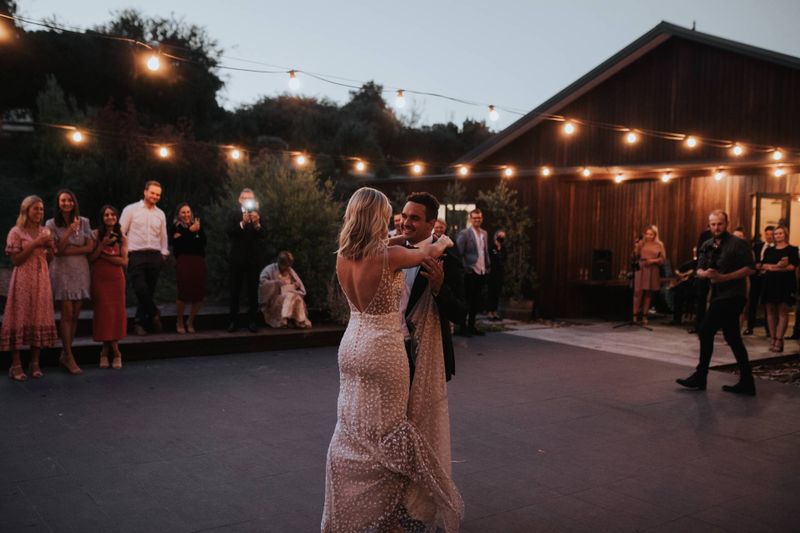 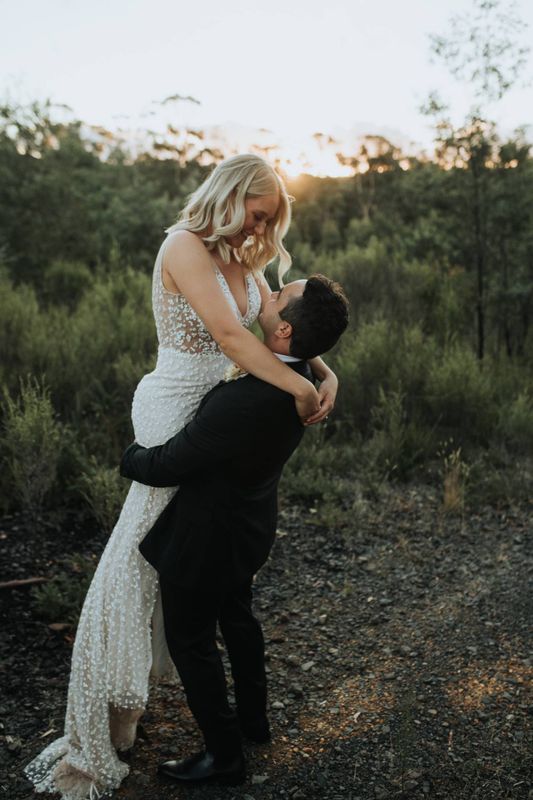 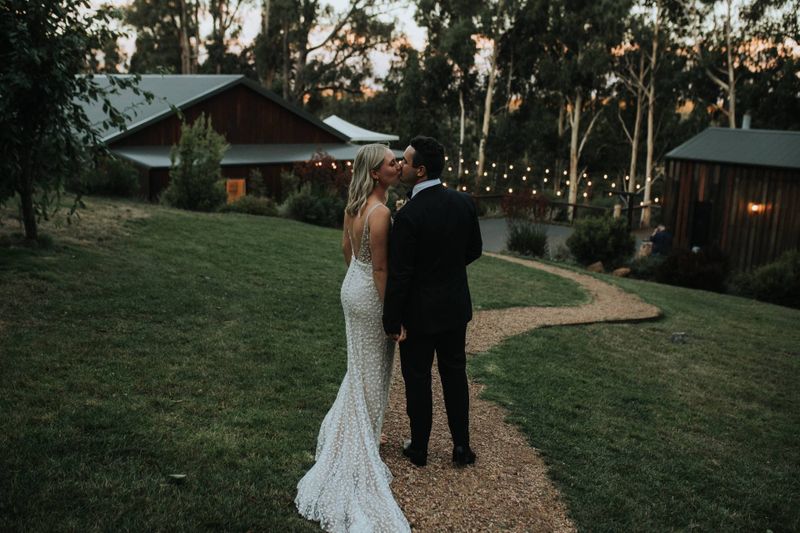 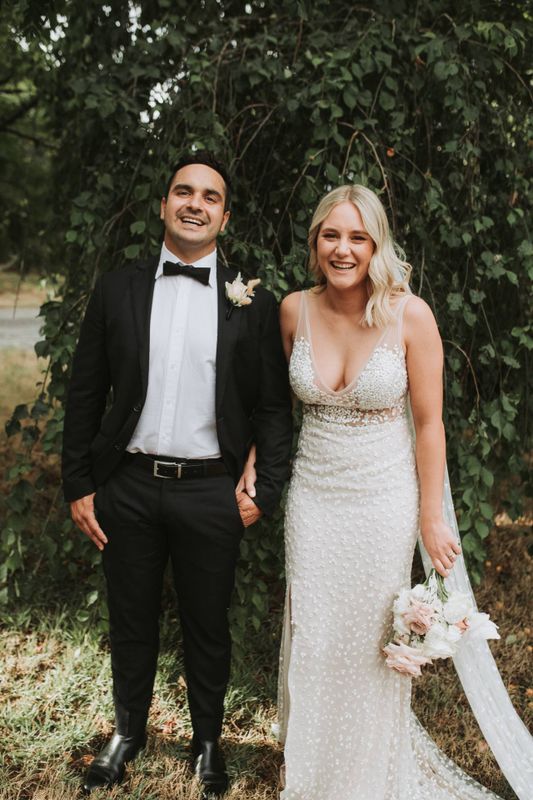 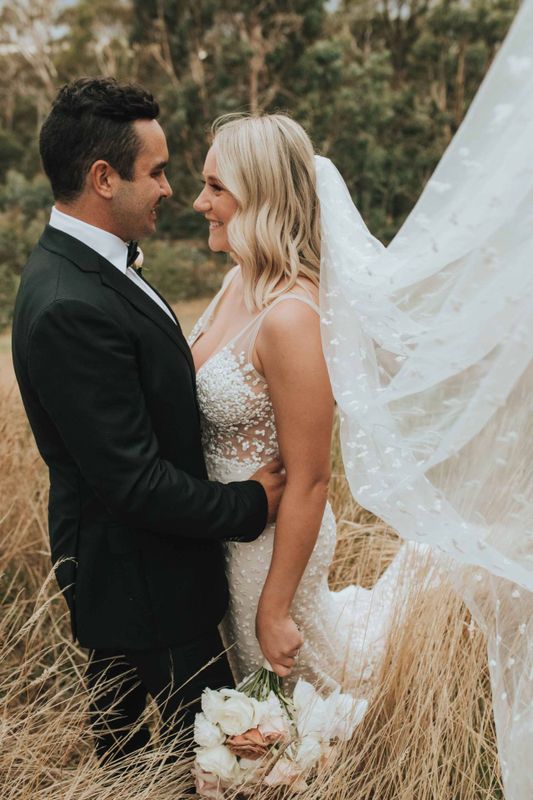 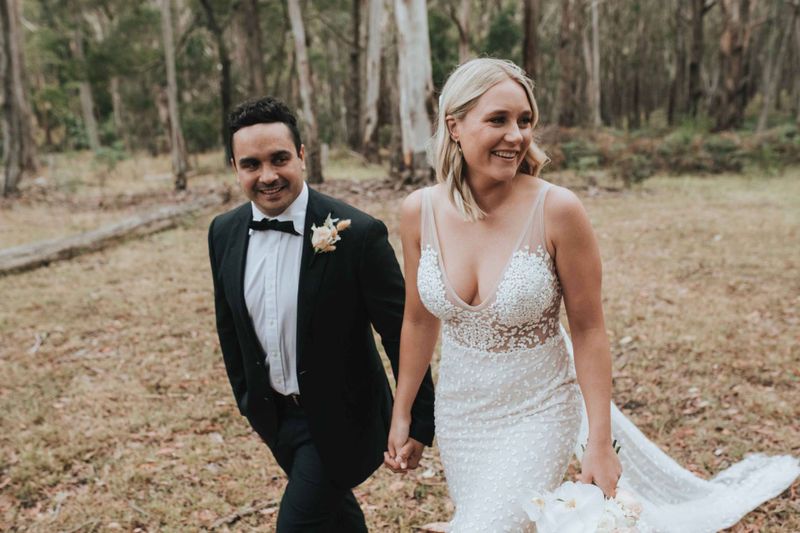