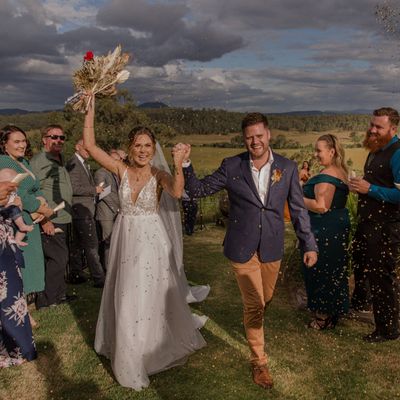 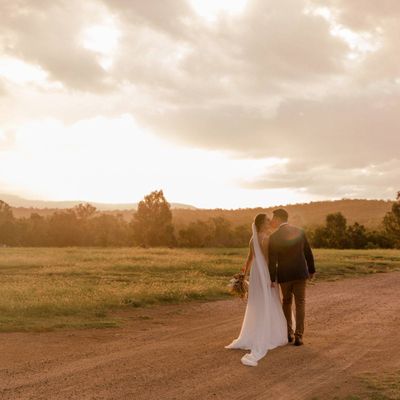 We met outside The Vic on ANZAC Day 2017. Mitch used to be in the army so he was out with all his army mates, and my friend Manisha (one of the bridesmaids) had convinced me to go out, even though I really did not want too. Manisha had yelled out to his group of friends and we talked to them on the street before we all headed to the pub together. As soon as I found out they were army boys I wanted nothing to do with them haha, my Dad used to be in the RAAF and he and mum always said to stay away from army boys. Anyway after a few drinks and talking to the boys heaps, Mitch tried to set me up with one of his mates – but I had started to like him from our chats. My mum then picked me and Manisha up, and we texted all night – then all week, then we had a proper date the weekend after where we went out to the movies and then to dinner and drinks with some more of my friends.

We had just got home from a night out and we were talking about what had happened and debriefing about it all and I turned to Mitch and told him that I loved him (I was the first one to say it and this was only like three weeks after we had met). He makes me feel so safe and I just knew that sitting there just chatting I knew I didn’t want to be doing this with anyone else.

Mitch proposed – I decided to propose in January of 2020. I decided I was going to ask her in April however, COVID happened so the proposal was delayed. I made a special trip over to speak to her parents and ask for her hand. They immediately said yes and I got down to planning my second attempt. I spoke to their family jeweller in Singapore who worked with me for months on the perfect ring. With Covid however, there was an insane amount of logistics and cost it would have taken to get the ring to me in Australia. I ended up having to get one of her dads co-workers who lived in Singapore to walk the ring into Australia, quarantine with it, take it on a FIFO trip out to Barrow Island in Western Australia, give it to another of Greg’s co-workers, fly to Perth with it, quarantine again, fly to Brisbane with it where Lani’s parents met him at the airport to retrieve the ring… and then my second attempt needed to be postponed because Greg who was a FIFO worked got called to WA for 3 months. I started planning my third attempt the next day. Lani is obsessed with picnics so I decided to plan an amazing picnic on my parents acreage (where we had our engagement party) with sunflowers, under her favourite tree.. and then it rained. So with some quick thinking and help from the parents we came up with a plan D. I was to take Alana up to the shower whilst they decorated mum and dads balcony. It came to the time for a shower so I asked Lani to come with me to shower, and she said no because she felt sick. After a little bit of convincing we went to shower whilst the balcony was decorated. We got dressed for dinner and walked back down, Lani saw pettals, flowers and candles everywhere when she got to the door and stopped because she thought something important was going on (not her proposal, she literally thought she was interrupting something someone else was doing even though there was no one else there). I gently pushed her out the door, took her hand and asked her the question I had waited a year to ask. She was in shock but instantly said yes 🙂
I forgot to say during this year that many people we knew had been getting engaged and Lani would say “hey Mitch, they’ve been dating less time than us” etc. Little did she know my continuing failed plans

At the MWL shop on the Gold Coast. It was the first dress I tried on at the MWL shop and I did not want to take it off! It is such a beautiful dress! I love the details in the bodice, how the little sequins catch the light and make the top sparkle. The tulle on the bottom of the dress falls beautifully, I was worried a dress like this would make me look puffy, but the way the skirt falls it still gives your body so much shape. I chose not to change into another dress at my reception, and even though my dress is going to cost so much to dry clean because the bottom is black, I am so happy I did not change. Peony was so comfortable I never wanted to take her off.

So hard to choose! The ceremony in general was so beautiful. It was full of laughs and tears and hearing our celebrant re-tell our story was pretty unreal. Also just a quiet moment that Grant and I had alone to take in the fact that we were actually married was really beautiful.

I loved every second of my wedding, from getting ready with the girls, doing a pre-wedding reveal with my bridesmaids then with my brother and dad – who both shed a tear, to the amazing ceremony and reception. My favourite moment, however, was when it was Mitch and I and we were standing in a paddock and it started raining on us. Our amazing photographer, Liz, suggested we get the clear umbrellas, but Mitch and I were happy to be in the rain. We stood there laughing, while being rained on, kangaroos jumping around us – it felt like Mitch, me and Liz were the only three people on the property.

I loved how comfortable Peony was, the top was tight so it shaped my body, then the bottom dropped beautifully but wasn’t tight so I could drink and eat all I wanted. The small train and matched with the soft 3m Holly Veil flowed magically on our special day.

-Everyone told us to take a moment and let the day sink in, and I have the same advice.
-I would also say do what you and your partner want too – traditions have really gone out the window. We kept some, and added some in that will be passed on to our children.
-Have a live band, ours was absolutely amazing! Rob sang at our ceremony and canapes, then we had a four piece band at reception, dancing around with a live band playing was so much more fun! (Elevation Band – could not recommend them more).
-Do not sweat the small things. It rained on our wedding, so we danced in the rain. Our bridesmaids literally ran down the aisle (before our musician could get through one verse of our aisle song), we laughed about this. The bottom of my wedding dress is BLACK, I would rather this and have the amazing memories I made then be worried about my dress. 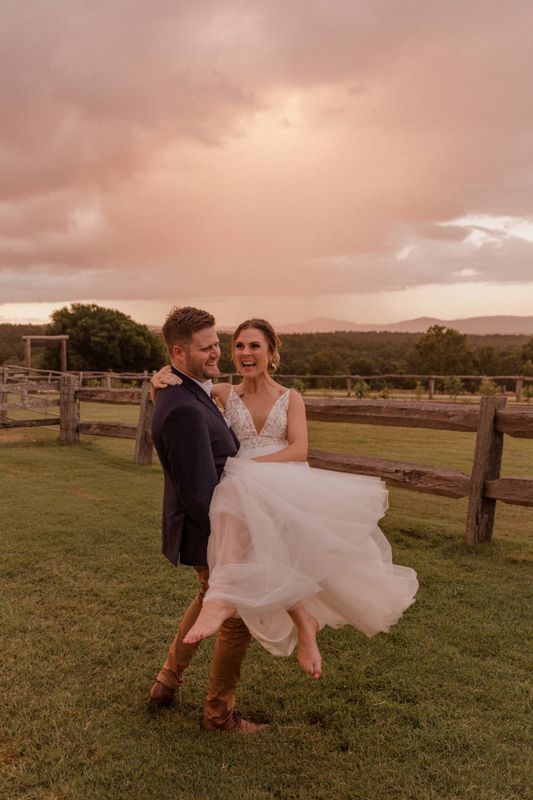 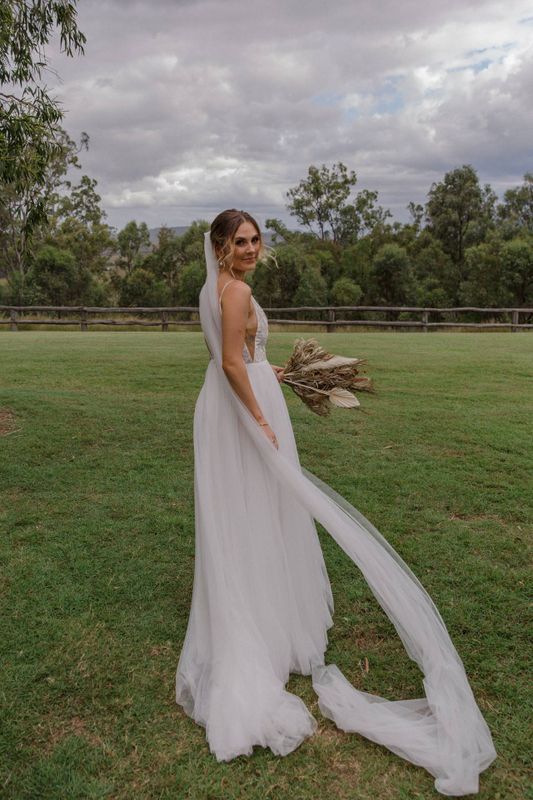 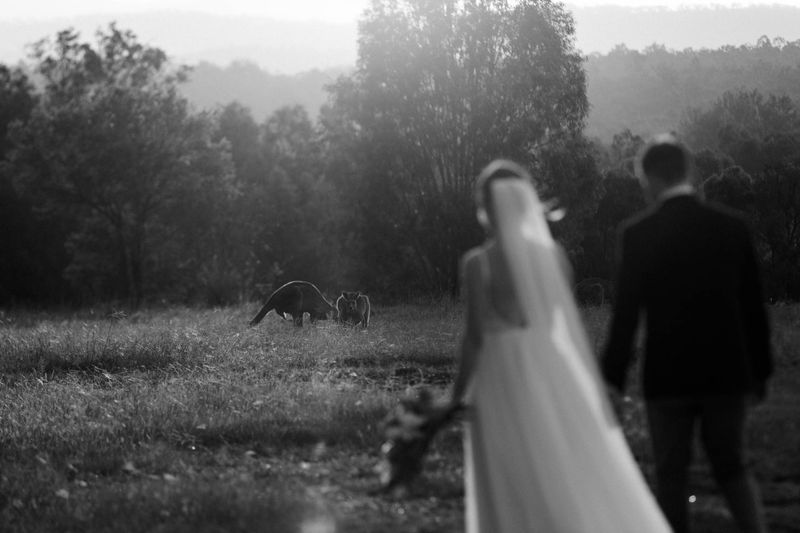 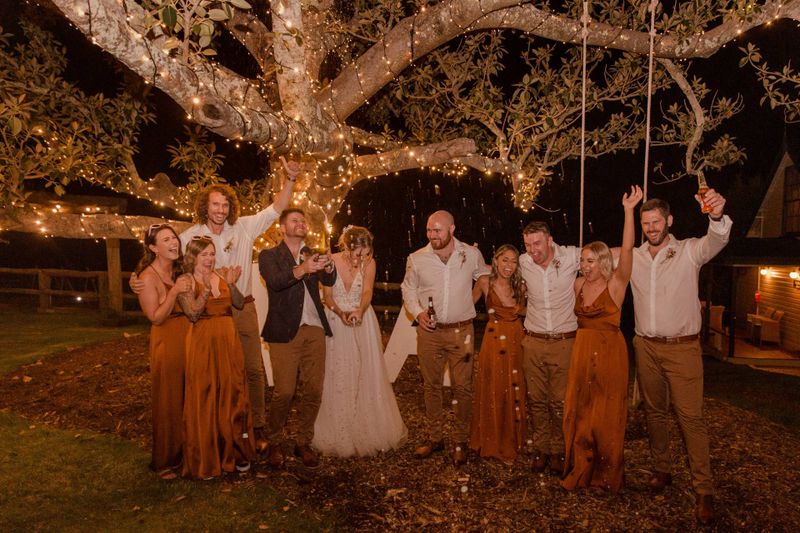 Made with Love Gold Coast boutique